The previous series of photos showed the mother bobcat beginning a hunt for her second kitten. She had caught a cotton rat for the first kitten and, after a short rest, began hunting for her second kitten. Following are a series of photos of the bobcat as she walked around the western edge of the wetlands. She was aware of our presence but we did not impact her behavior in any manner that we could see. At Sweetwater Wetlands, the bobcats seem to understand the human presence and know that humans (carrying binoculars and cameras) occupy the same paths but never interfere in the cats’ business.

The bobcat walked along the edge of the reeds at a slow pace and periodically stopped, turned towards the reeds, and listened and looked. She was very attentive at these times. 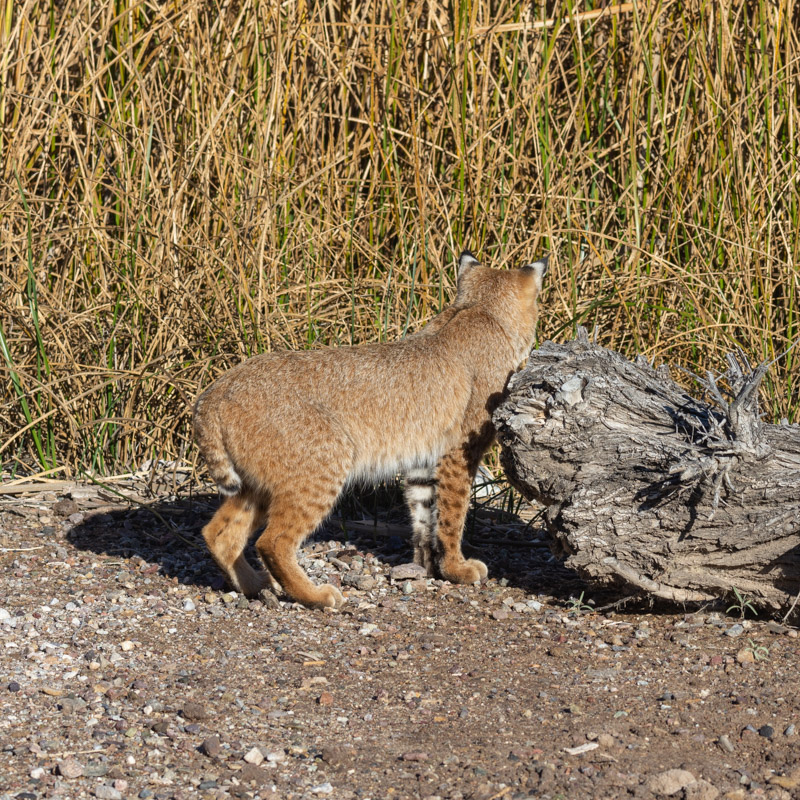 Sometimes whatever caught her attention receded and the cat continued on her search. She always maintained a focus on the reeds as she walked. In this shot you can see the large ruff of fur on her cheeks and her very large paws. 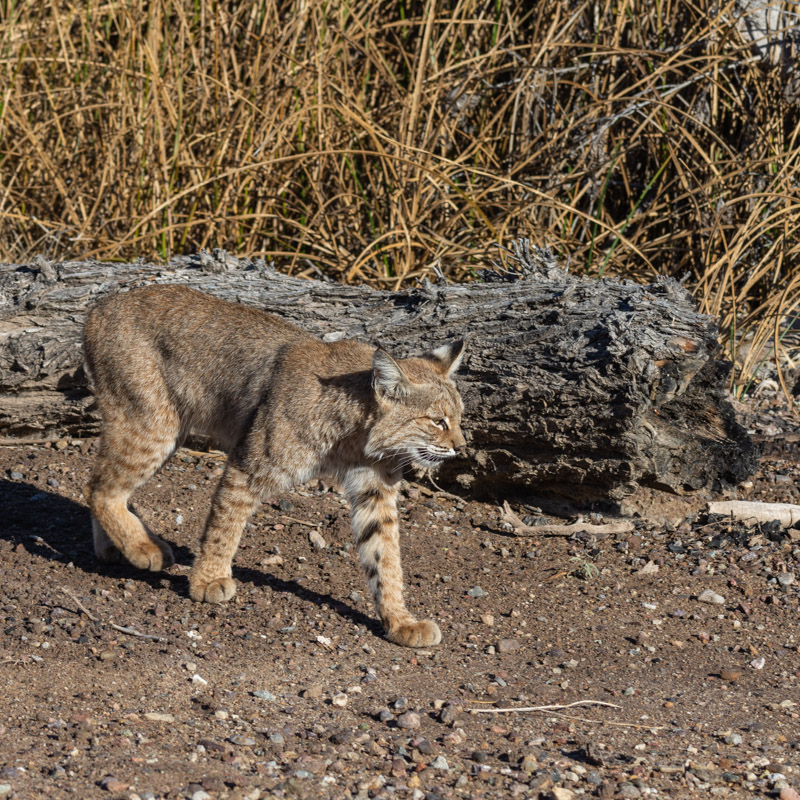 Frequently, she would alert to something in the reeds and would stop and study. She was working the entire time: alert but relaxed. You can see her ears pointing forward trying to triangulate the sound that she is keyed on to. 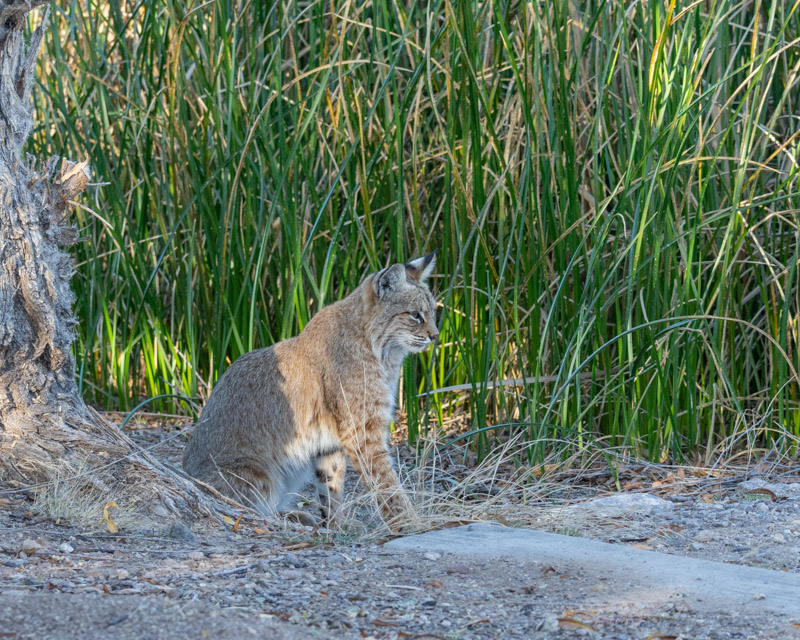 Several times her efforts seemed like they would pay off. After staring at this brush, she crouched down in an attack mode. Her ears are pointing forward and she is on her haunches. 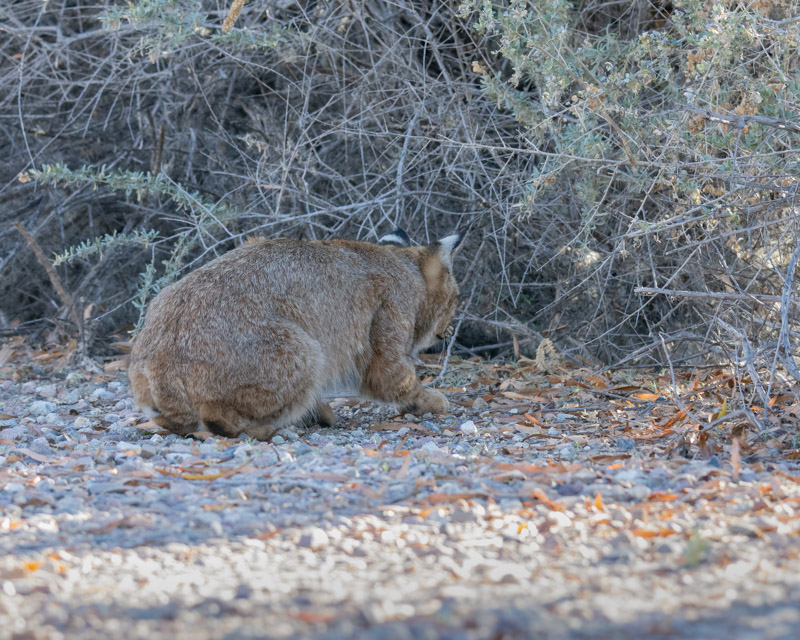 She gets ready to pounce!! 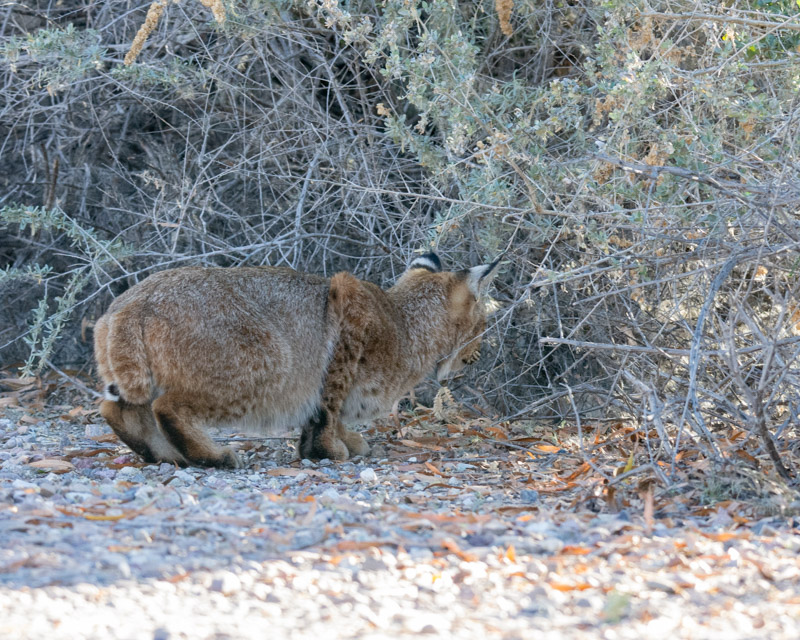 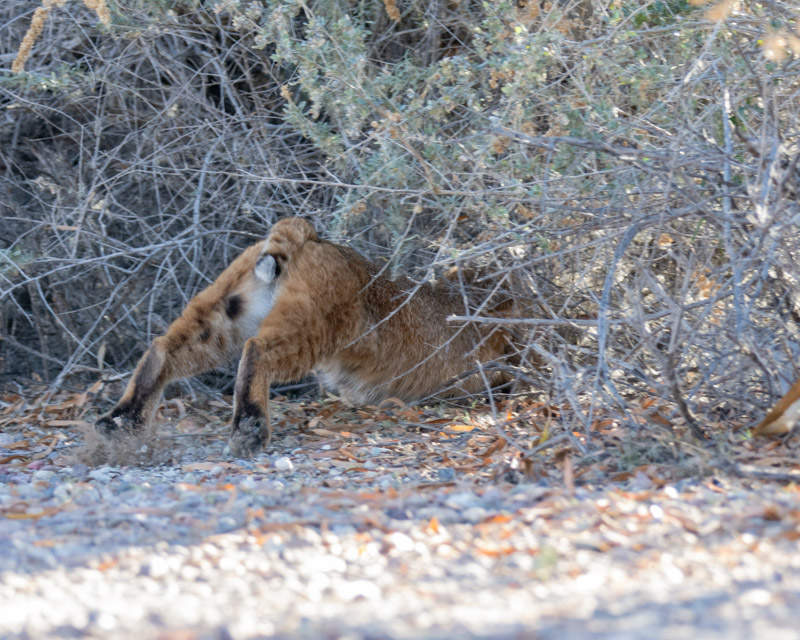 To no avail. After several seconds she emerged without anything to show for her efforts. Often after an unsuccessful attempt, she would spray the area (see below). laying claim to that spot, and then move on. She would also often lick her lips. I’m not sure why, but I observed her doing that after many ‘hunts’. 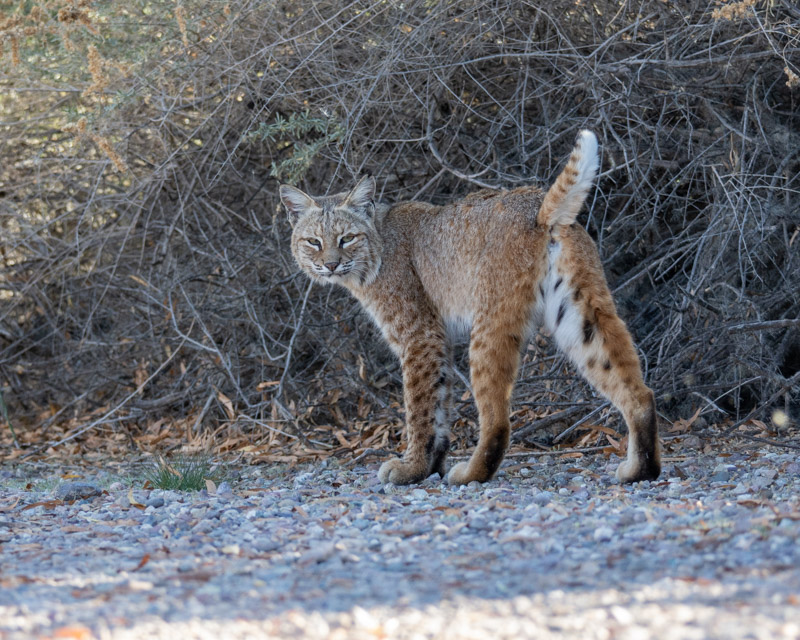 Here is a close-up of the mother bobcat’s face from the photo above. It shows that she has some black spots on her pink nose. Those spots are particular to this cat and help to identify her to us. In this shot you can also see the typical bobcat pointed, tufted ears. 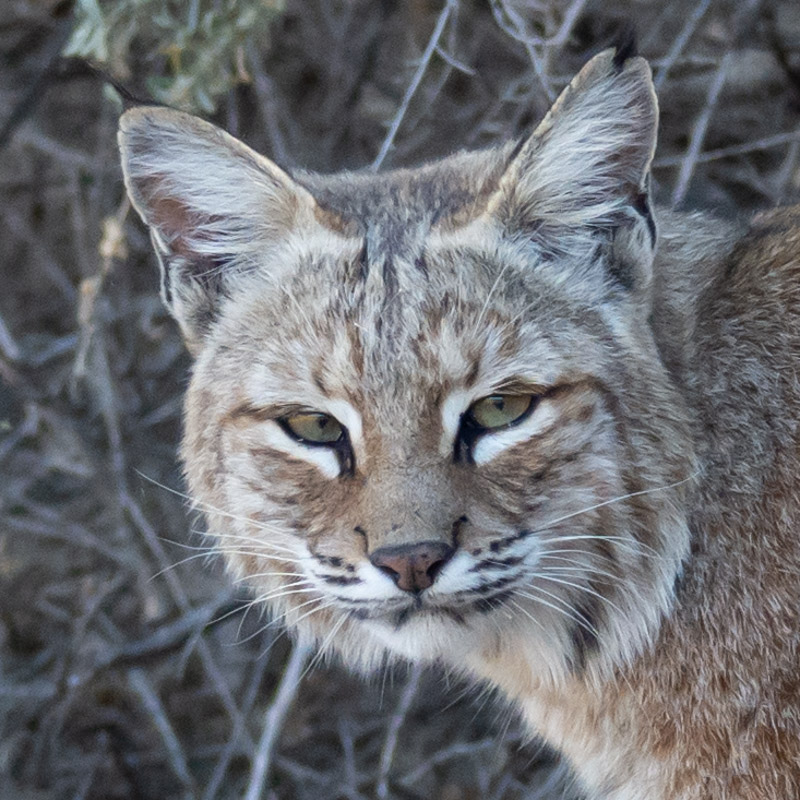 For comparison, look at the kitten’s pink nose. There are no beauty spots on this cat’s nose. 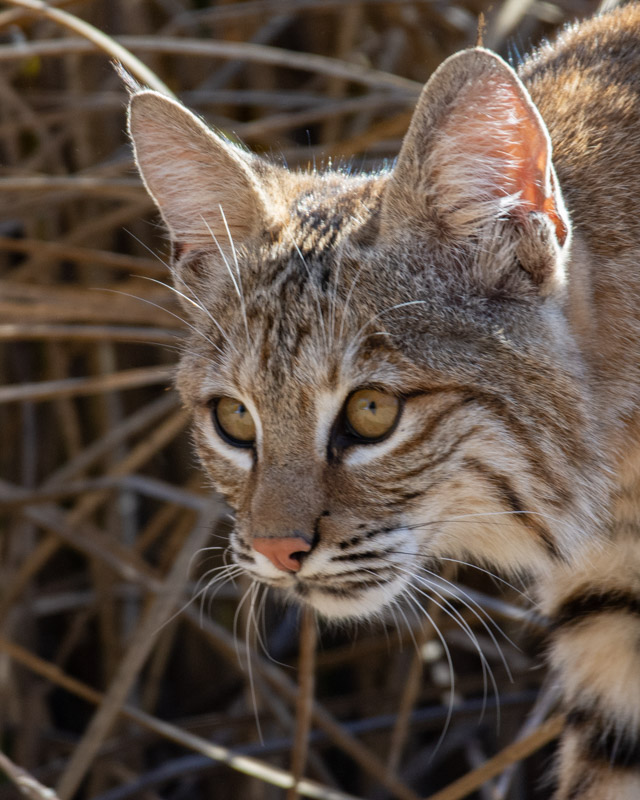 The mother cat continued to hunt for quite a while. She was never successful while we were watching her but she took no breaks from her mission and worked the entire time. 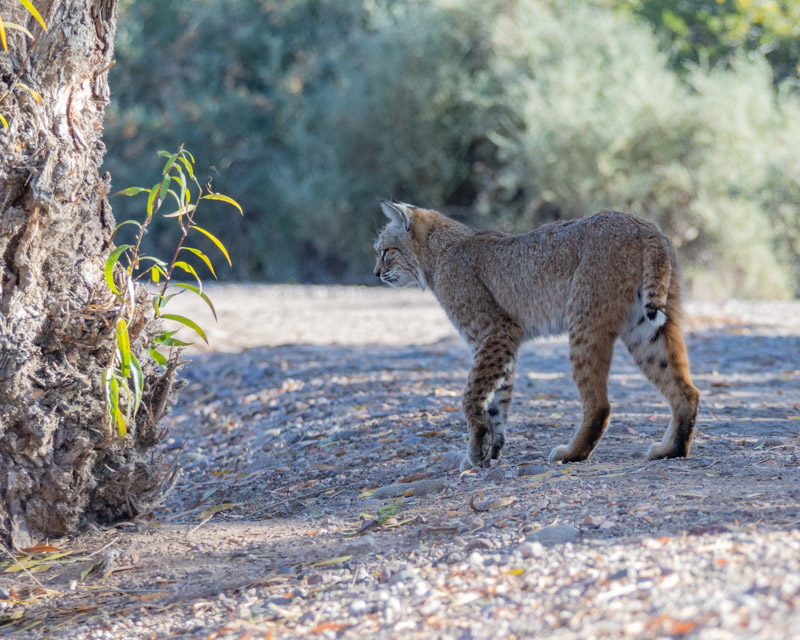 And here is one last look at this beautiful animal. 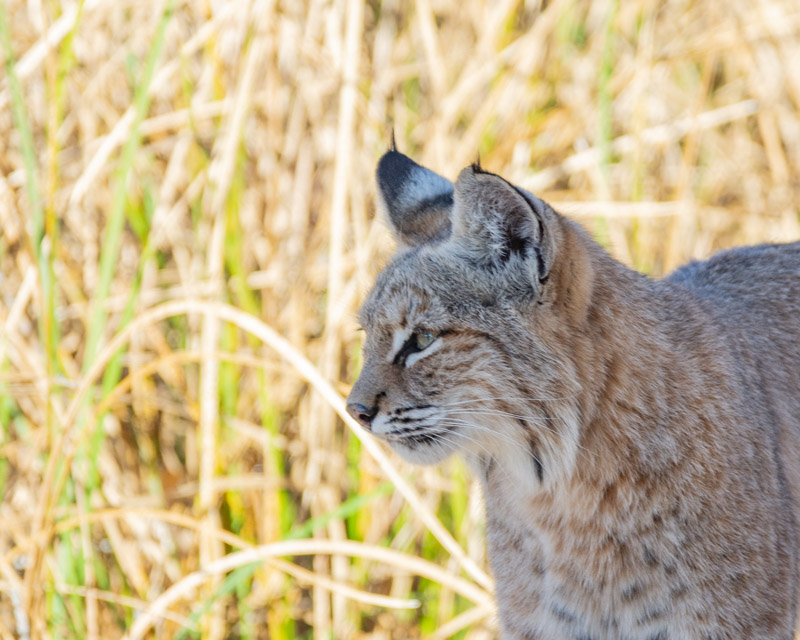 Coming up next, the final photos in the series.