Bobcats live throughout the Foothills. Some of you are fortunate enough to get glimpses of these beautiful creatures who live among us. A few of you are even more lucky to have them spend time in your backyards! Enjoy this series about a family I came across recently.

I have been hearing about a bobcat family at Sweetwater Wetlands for several weeks now. The few times I was out there recently I never saw any signs of the bobcats. Monday, I decided to try my luck in the afternoon and set out on my own. The site is 60 acres in size located near Prince Road and I-10 and includes wetlands, desert areas, thick brush, settling ponds, and is adjacent to the Santa Cruz River, Columbus Park (on Silverbell Road), Silverbell Golf Course, and the old Water Treatment Plant facility. There is a lot of area for bobcats and wildlife to live in and to hide.

I headed west and chose among several paths. Imagine my delight to turn a corner and to see this in the distance. 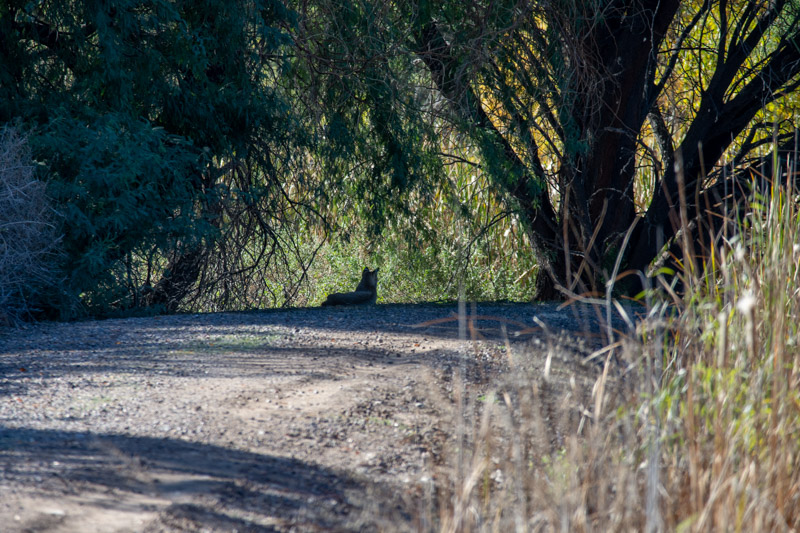 The bobcat was resting in the shade of a mesquite tree. As I approached, it stood up and walked to my right, where it disappeared around the corner behind the reeds. I held my breath and followed quickly.

And there it was! The cat stared intently at the reeds for a moment, walked a bit forward and then turned, looked at me, and then walked into the brush to the left of this photo. 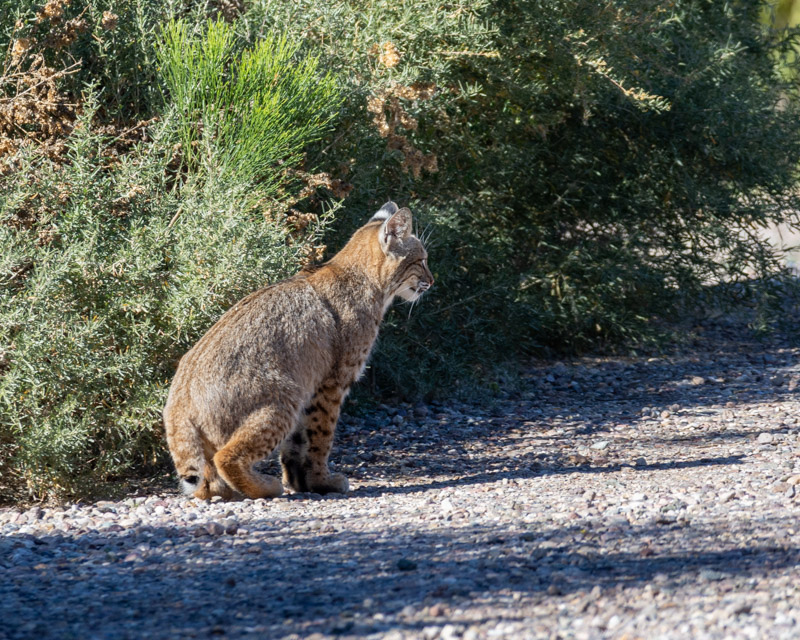 I walked to that area and slowly walked into the brushy area for a few yards. I didn’t see anything at first. And then…

There was a bobcat in the tree on an arching branch about six feet off of the ground. Was it the same cat? I couldn’t tell and it didn’t matter. I assumed it was the same one. Now in the photo below and in many of this series, the lighting was very tough for photographs. It was a bright and sunny day in the middle of the afternoon. Many shots were backlit. In others, the glare from the sun almost washed out the pictures. Still, the bobcat was there! 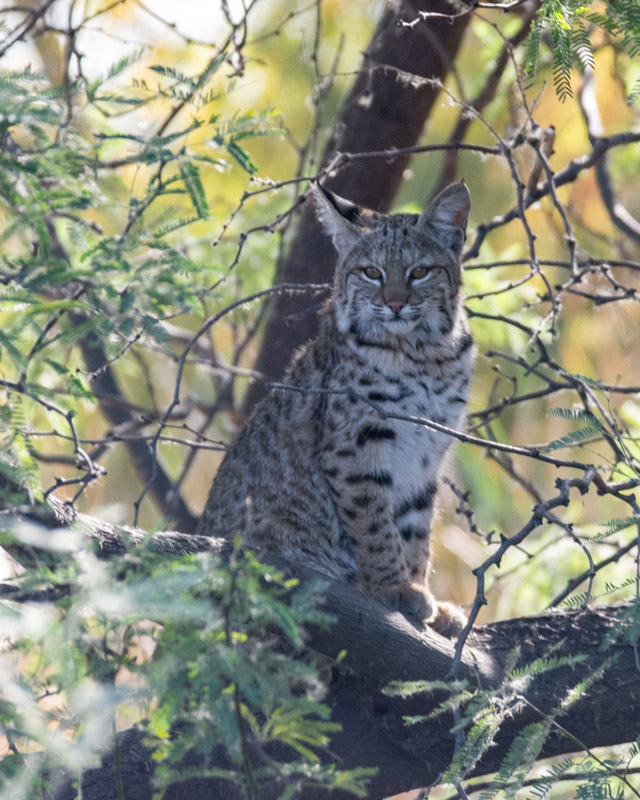 I backed out and walked around to the path on the other side of the brush to get a different look, if possible. The cat was well hidden behind the thick branches but it sure looked comfortable and at peace on that branch. I thought this was one of the bobcat kittens and realized (and hoped) that the other kitten and the mother wildcat might be close by. 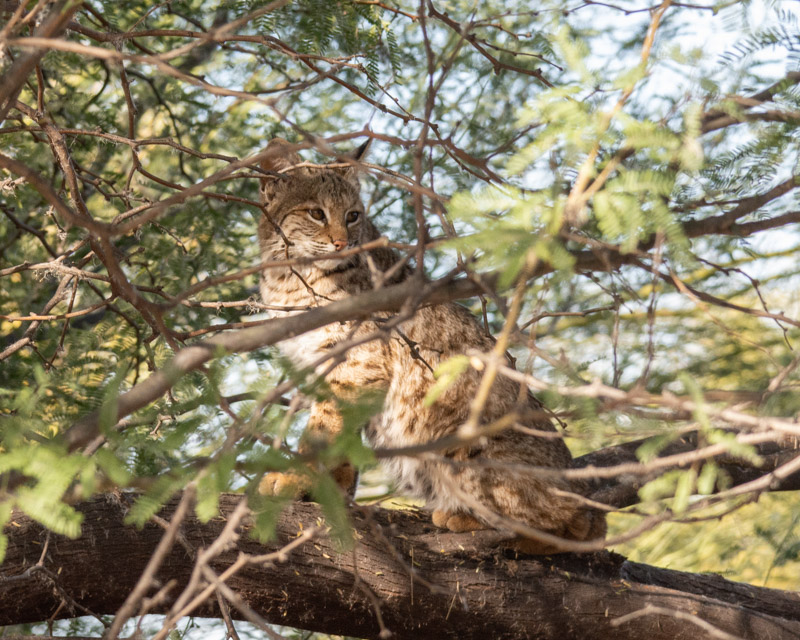 Sure enough, with some looking around at the nearby underbrush, I spotted the other kitten. It moved from the dark shadows towards the path and the glaring sun, saw me, and then withdrew behind some extremely thick brush, sat down, and began grooming itself. the vegetation was too thick for any good photograms, but I could see bits of movement and activity through the branches. 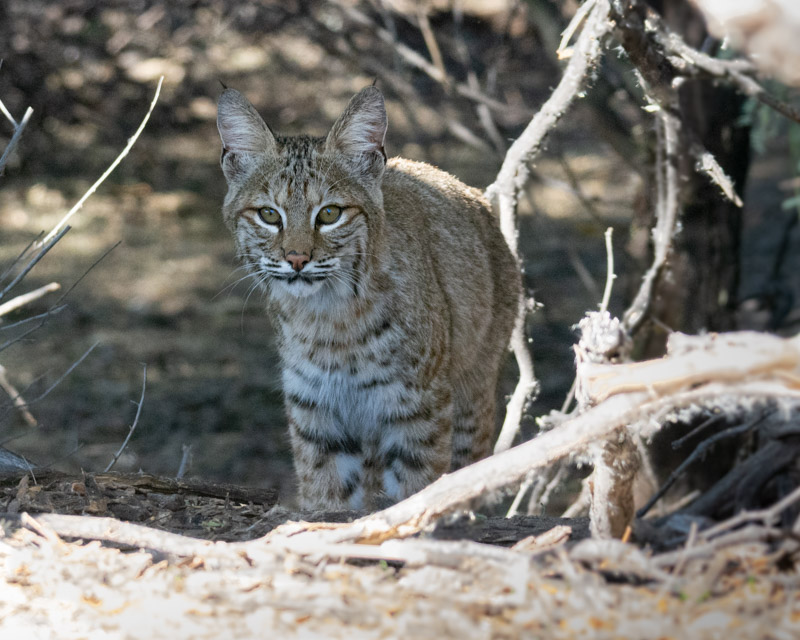 By then, the first cat had begun a cat nap. 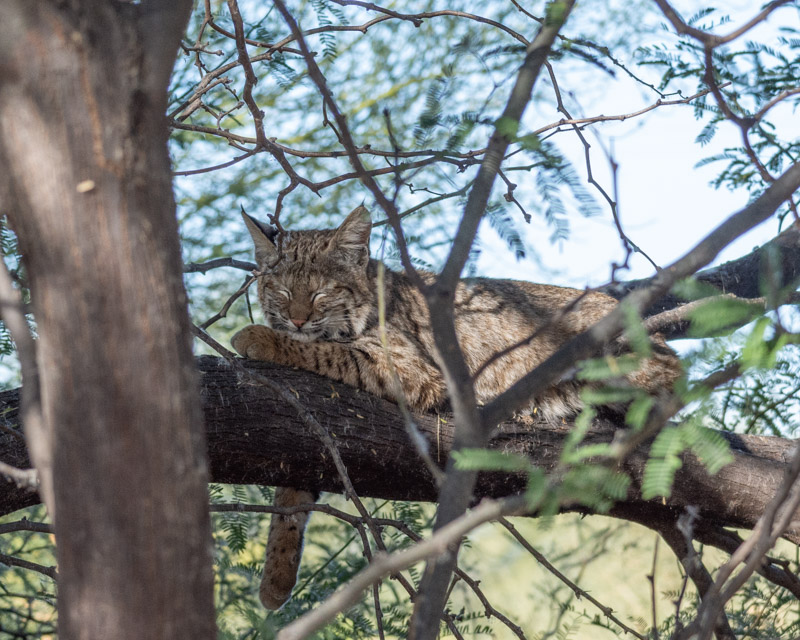 This is a very cute kitten. 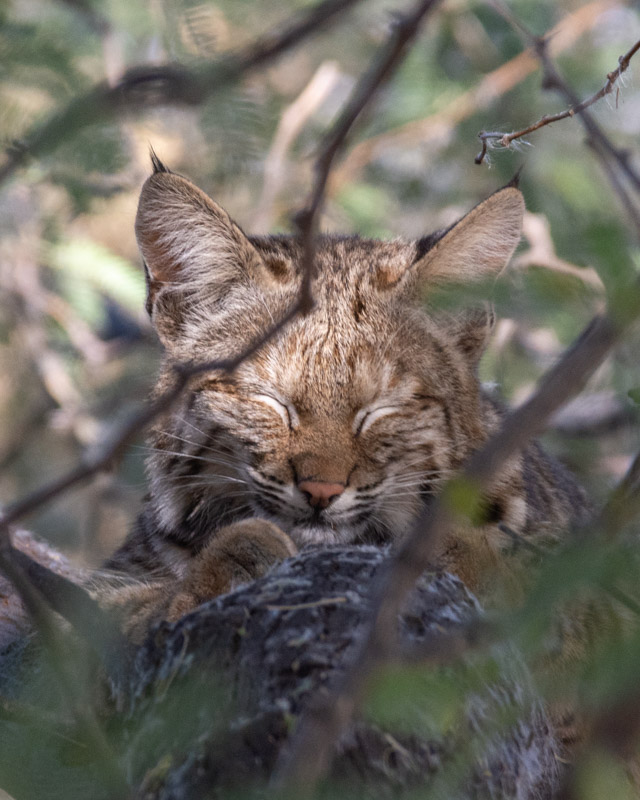 It certainly didn’t sleep deeply. Its eyes would open every minute or so before closing again. I guess these creatures can be very wary and sleep at almost the same time. 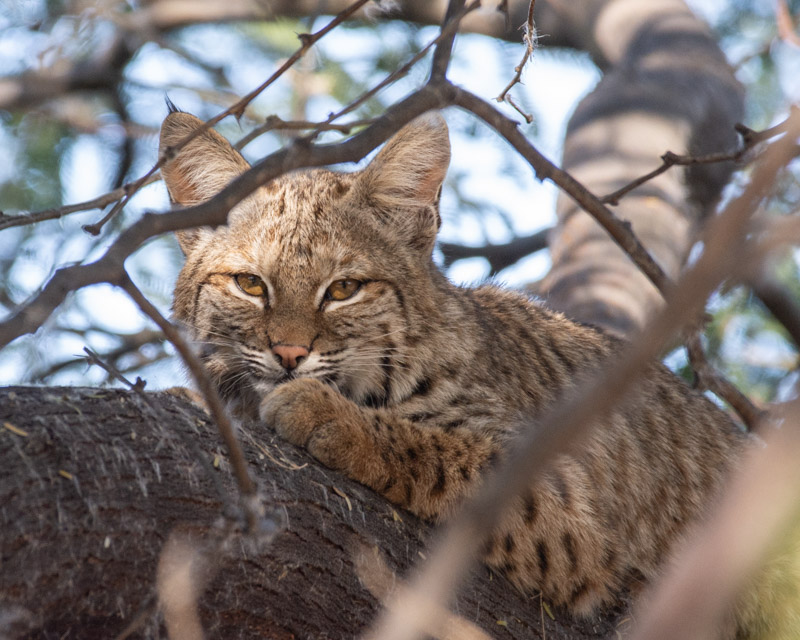 After about a half hour of this nap-time activity, both cats suddenly perked up, and then moved, disappearing on the other side of the brush. I made my way back down the trail where, looking through the vegetation, I saw the mother bobcat laying down and one of the kittens with a cotton rat that the mother had apparently brought to it.

Here is the kitten with its snack. Look at those gigantic paws! 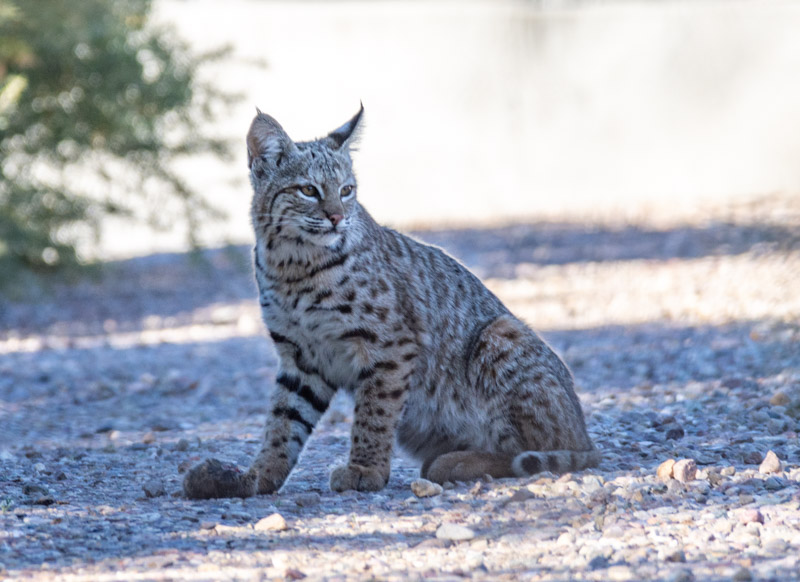 I believe the wildcat is saying a prayer now while contemplating how tasty the treat will be. 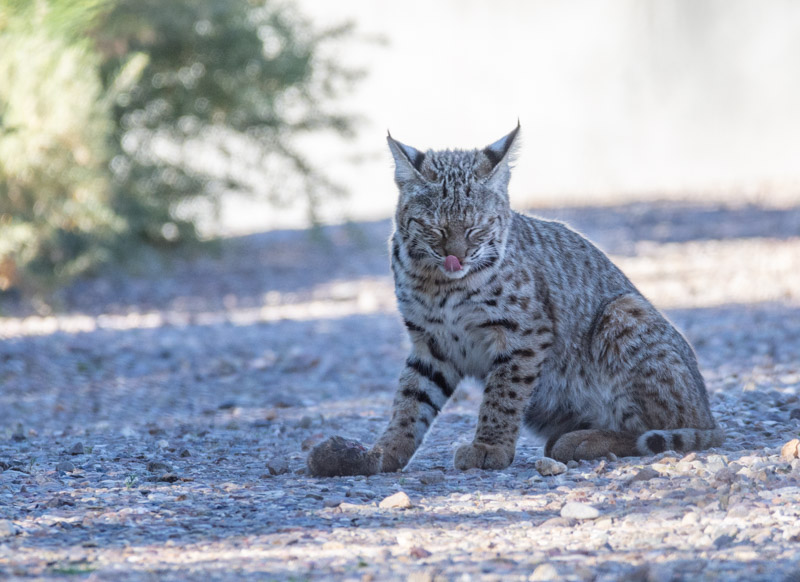 And the feeding began. 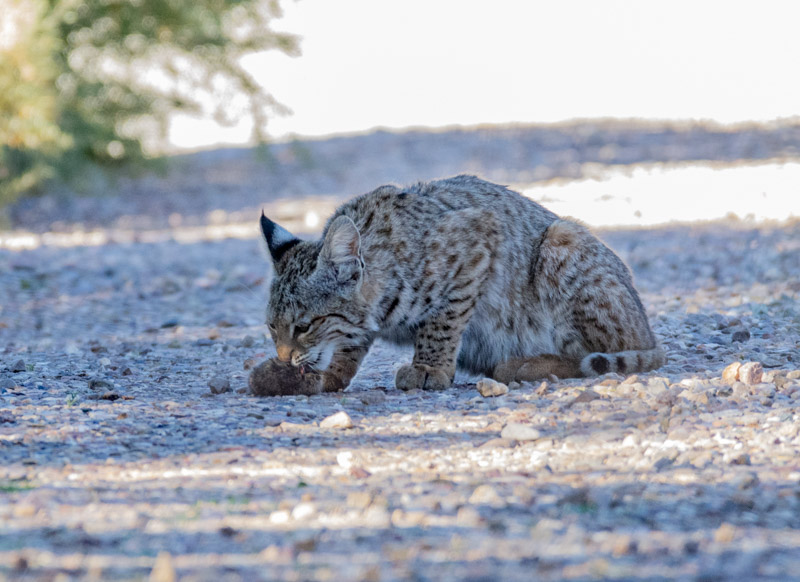 The kitten paused as the mother suddenly got up and moved beyond it with the second kitten right behind, leaving this bobcat alone with its snack. 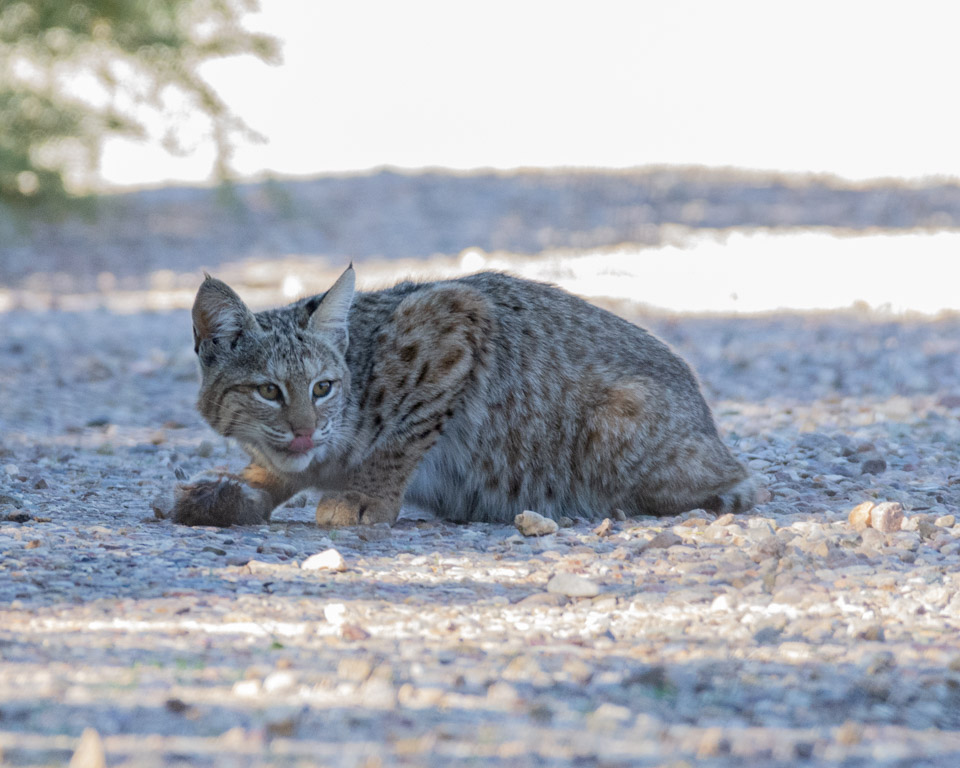 I followed the mother as she began hunting for food for her other child.