With this cold weather in the Foothills, the Northern Cardinals and Pyrrhuloxia are coming in for the ‘black oil’ sunflower seeds regularly. They seem to prefer perching in the cholla cactus on a few different spots while waiting until the time is right to fly over to the seed feeder. Below are some photos taken within a half hour while watching the birds one recent overcast afternoon.

The male Cardinal is stunning. You can see a Cardinal’s typical black mask and the orange, cone-shaped beak of a cardinal in this shot. He was facing the seed feeder but looking right at me through my kitchen window. 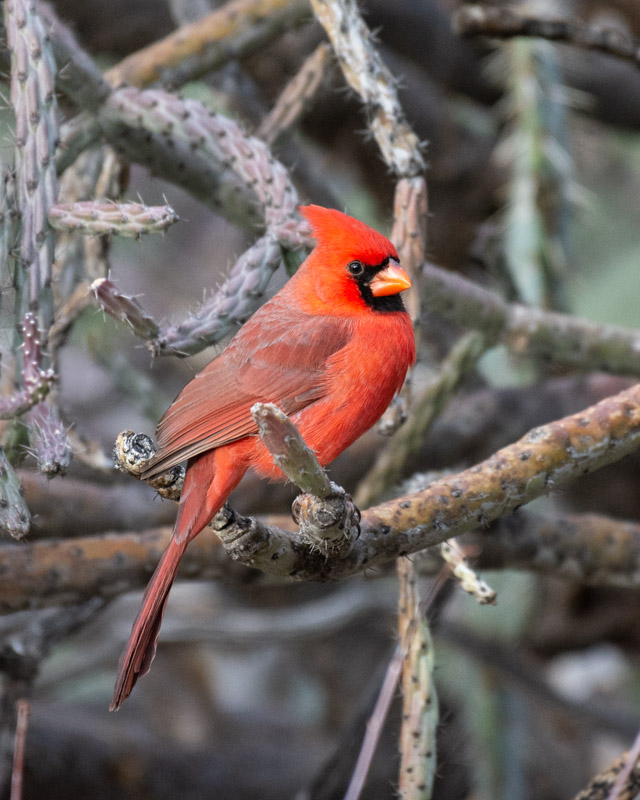 In this shot he is getting ready to take off from a different perch. His tail has been lifted up, he is leaning forward, and he has laid the feathers of his crest down flat. A second later he took off for the feeder. 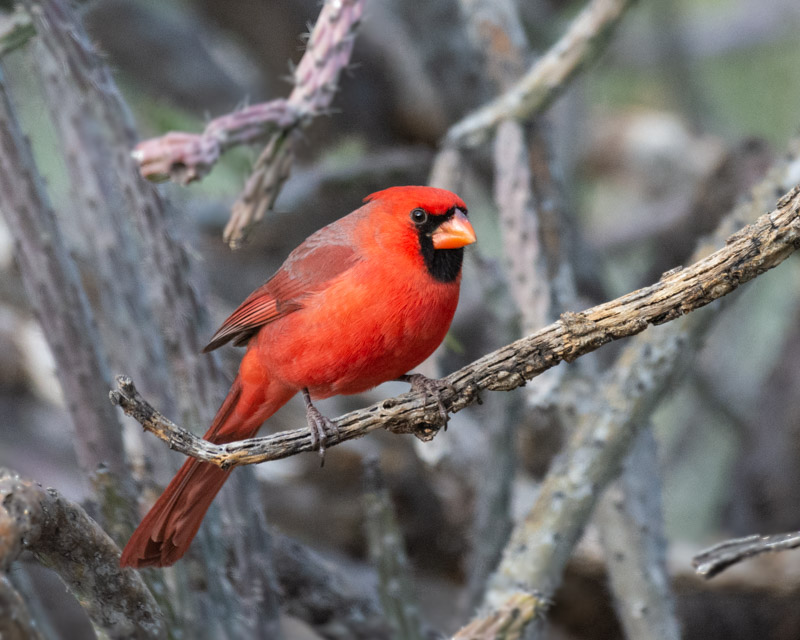 For comparison, below is a photo of a male Pyrrhuloxia. The Pyrrhuloxia is shaped very similar to the Cardinal but is mostly gray with red on his face, crest, belly, wings and tail. The rest of the bird’s feathers are gray. Also, note the very different shape and color of his beak. Rather than orange, it is a more gray and yellow color. And rather than a flat ‘mouth’, it has a stubby curved beak that looks like a parrot’s beak. 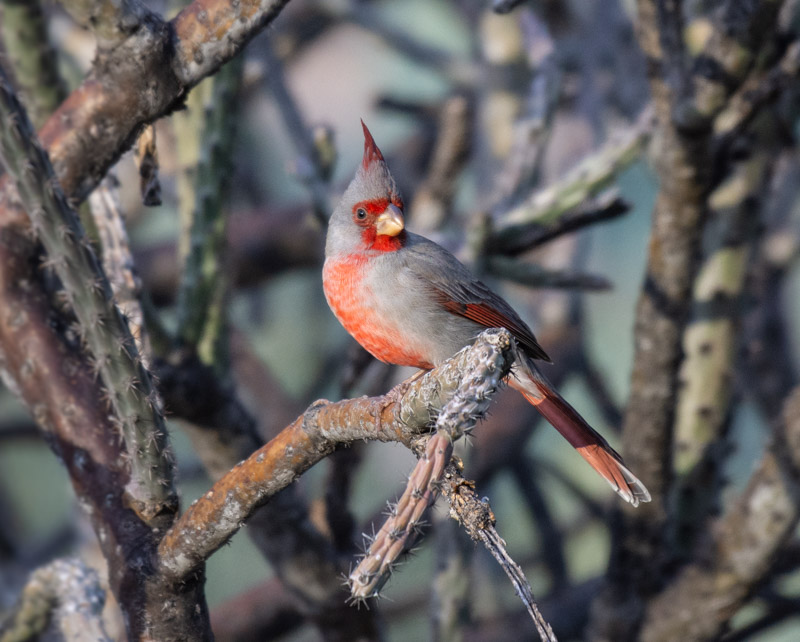 Here is a male Cardinal again to compare to the Pyrrhuloxia above. This bird almost appears to be smiling! 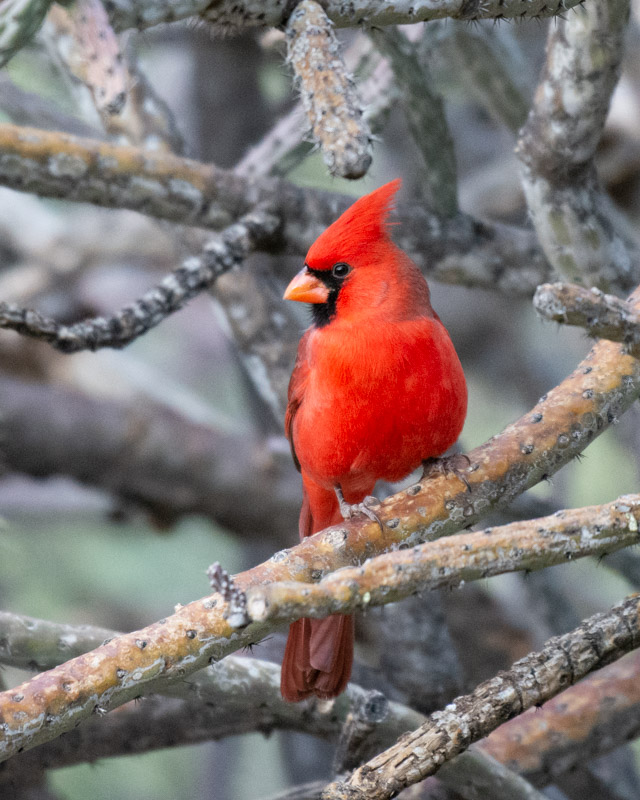 And here is a female Pyrrhuloxia. She is colored a drab gray with just a hint of red in her crest and on her face. You can see some red in the underside of her tail. In this pose, she looks a bit plump. I think it was mostly due the angle of the shot and the fact that it was cool, so she was keeping herself warm holding her feathers that way. 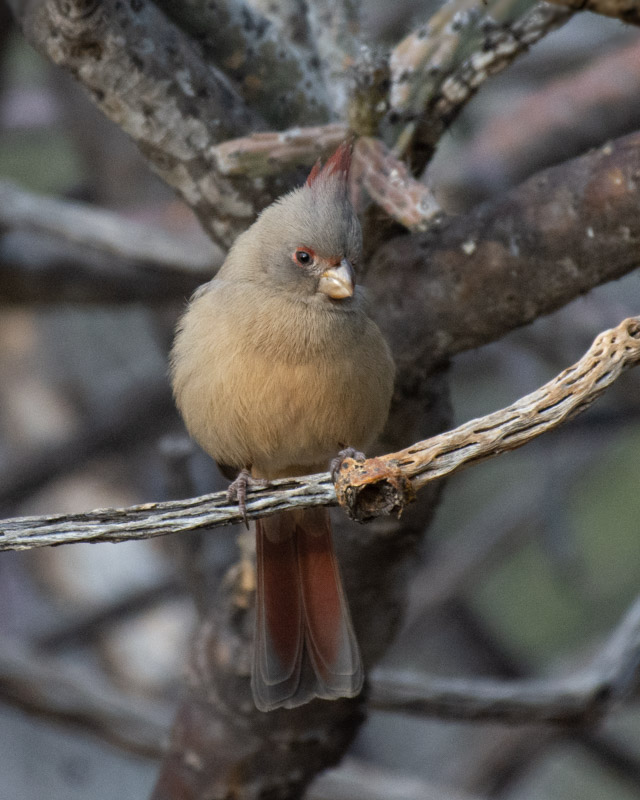 Compared to the female Pyrrhuloxia above, here is a female Cardinal below. She is not gray colored but a warm, light orange. Her beak is very orange and she has a touch of black in her face. 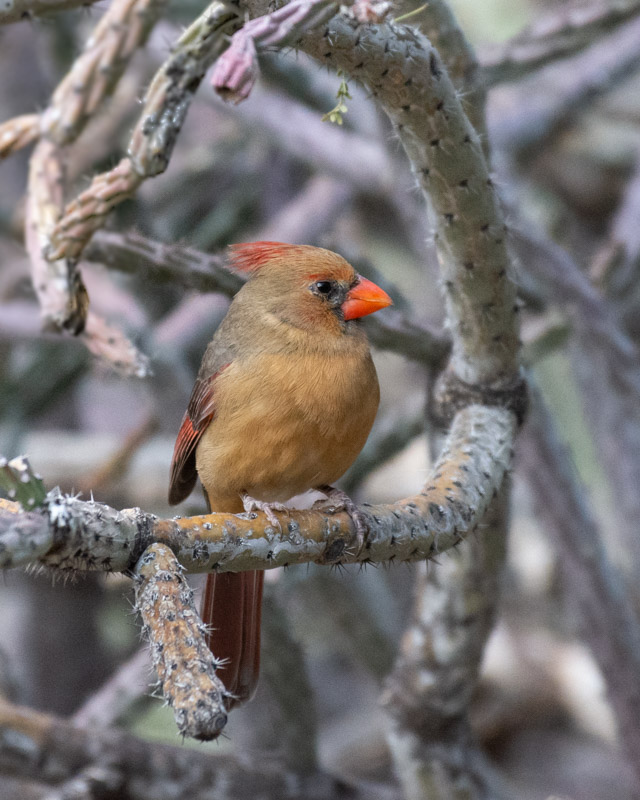 Here is a male Pyrrhuloxia again. 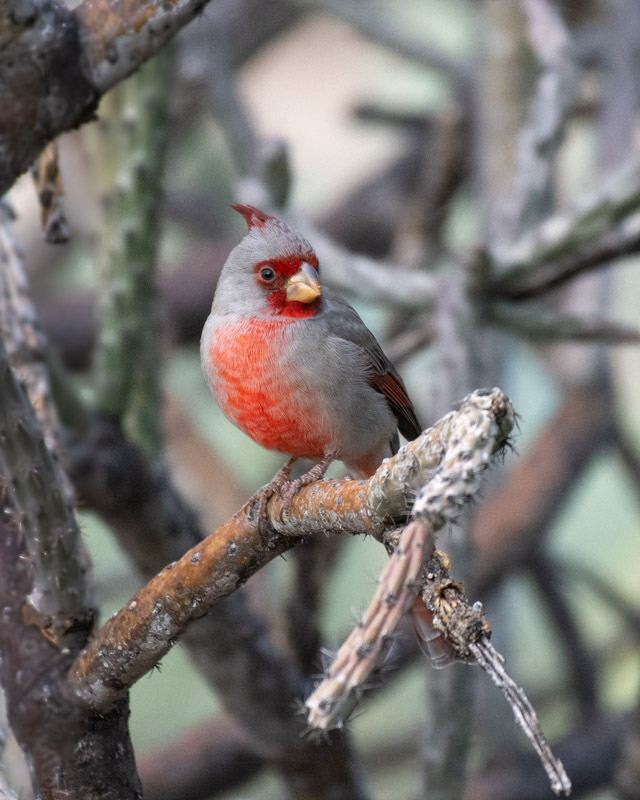 Here you get a sense of how lush the cholla cactus plant is. Both a female Cardinal (on the left) and a female Pyrrhuloxia (on the right) are waiting their turn at the seed feeder! 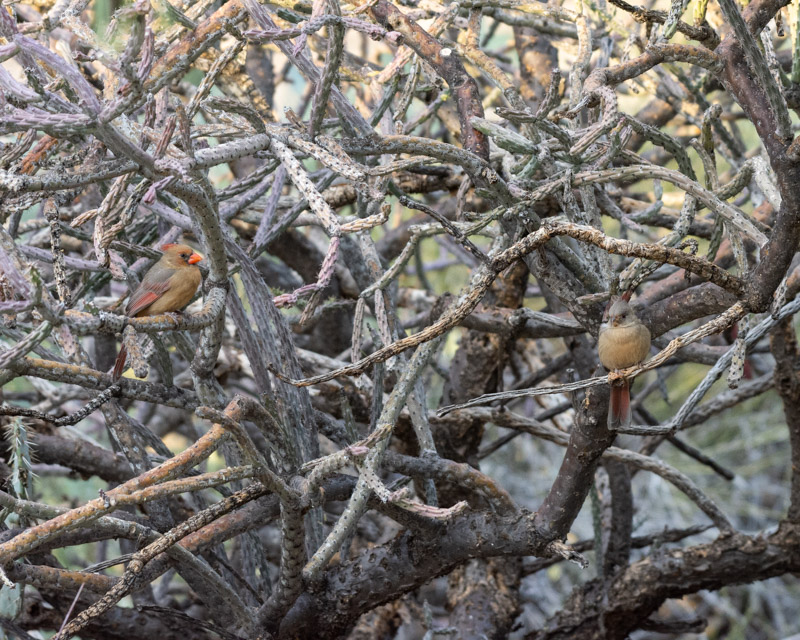 And here is the seed feeder with a male Pyrrhuloxia eating. This is a specialized feeder for these birds. When a Cardinal or Pyrrhuloxia lands on the perch, the plastic front swings down enough so that the hole in it lines up with the gap in the feeder allowing the bird to access the seeds. The perch is counter-weighted to match the exact weight of those two bird species (about 43 grams). If a heavier bird like a dove lands on the perch, the plastic cover drops too low for the hole to line up with the opening so seeds are not available. If a lighter bird like a sparrow lands on the perch, it does not drop low enough to line up and make the seeds available. 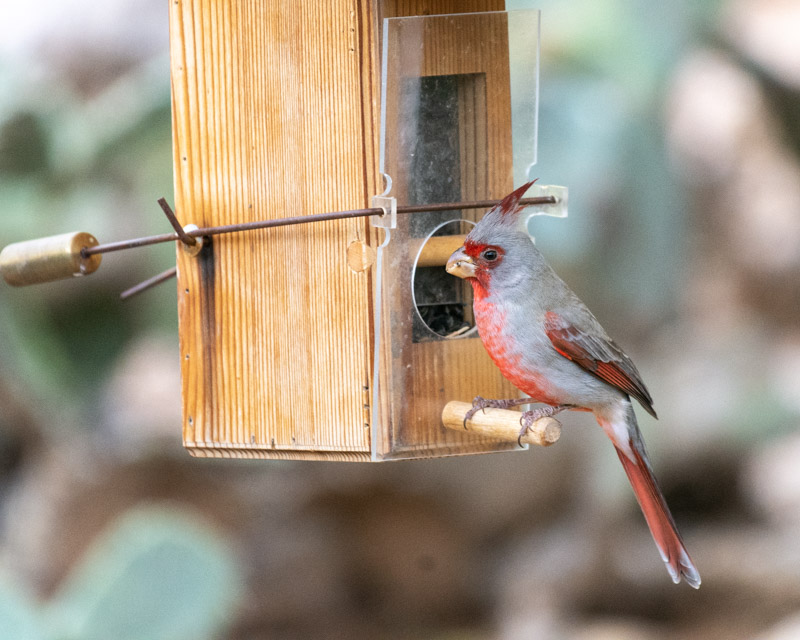 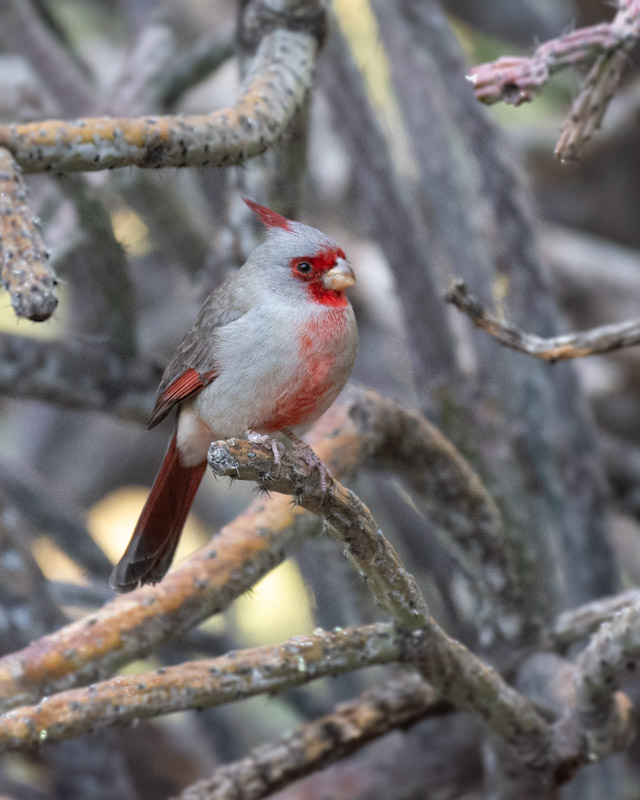 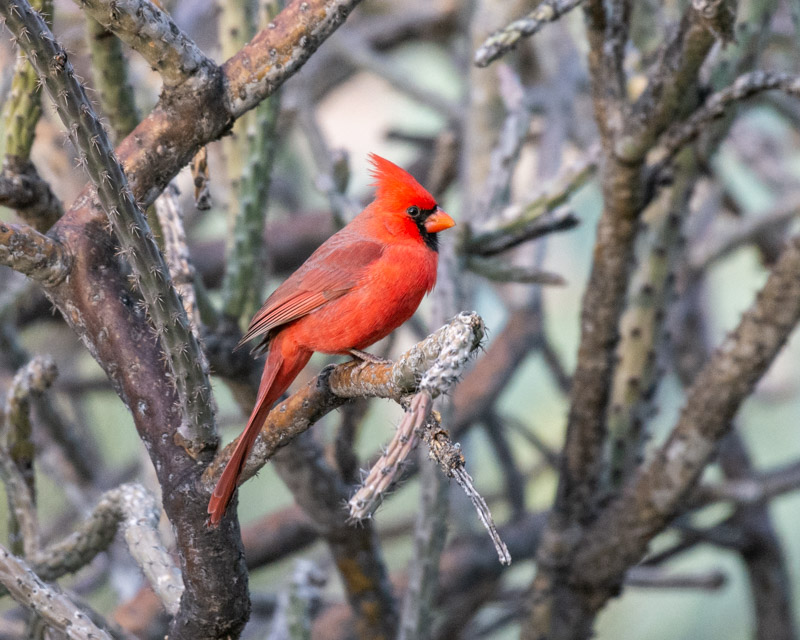